Status Quo or Status Go: Does It Really Matter if It's "Traditional"? 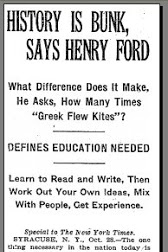 Not true. In a time like this, we need to know our history to see how much is possible and to be aware of all that’s been accomplished by our predecessors.

History tells us how we came to this place, for better or worse, and whether we're stuck here or not (usually not). And knowing how things have changed inspires hope that other things can too in spite of any current darkness.

But in what sense does history somehow provide us with norms, tell us how things should be, or model what must be done? And are we victims of our past?

Those are questions we need to ask when we hear someone use that loaded word: "tradition." That's because the basic issue is: just because something is labeled traditional, does that make it good, moral, humane, just, caring, or even valuable enough to preserve?

Now, a lot of things could be considered traditional because they've made it down through history, sometimes against apparently overwhelming odds. Slavery is traditional. Women idealized as male property is traditional. Living with cockroaches is traditional. So are an assortment of diseases such as small pox, typhoid, and pneumonia. To fight them is to go against the weight of tradition.

“It’s traditional” has been evoked to claim that certain things shouldn't change, as if we’re expected to assume that because something is traditional it's better than things that aren't. "Love one another" is a traditional recommendation, but its value doesn't rest in the fact that it’s an old idea, and certainly not in whether or not it's traditionally been widely practiced.

That something is "traditional" has been used to argue against LGBTQ people just as it has against any group that a dominant culture has marginalized. If one thing is surely traditional, it's discrimination.

In America "traditional family values," refers to the values of white, patriarchal, discipline-oriented, middle-class families in 1950's nostalgia. All around the world “traditional” seems to mean the values of upper-class males who socially, economically, and religiously dominated the majority in their culture.

Those values are supposed to be better than treating women and children as full human beings who are as good as grown-up males, or recognizing the value of letting people love whomever they choose. 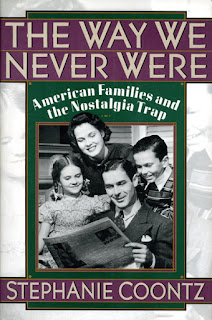 "Traditional understandings of the Bible" are assumed to be better than those of modern scholarship, especially if they're taken to condemn anything that threatens "traditional family values." Words like "revisionism" and "modernism" are used as putdowns. And this is so even if these "traditional" interpretations actually were developed as late as the mid-twentieth century.

Religious traditions are defined by authorities who see themselves as somehow more qualified than the rest of us to know what we should all consider true. They include merely some of the ideas, events, and morals from religious history while ignoring many others.

Then these traditions are used to tell people who they are and confine them inside internalized, restrictive psychological, emotional, and social boundaries that promote guilt, condemnation, and self-hate in those, such as LGBTQ people, who don't fit in.

It's an emotional attachment to something called a “tradition” that imprisons. For we were not taught that a tradition is valuable and true merely through logical discussions of it with us.

Traditions were given to us as members of a community, which may have included our immediate families -- a community that defined us, accepted us, affirmed us, and validated us. We also learned that that community would do so until we stepped outside of its "traditional" beliefs to live on our terms for ourselves.

As LGBTQ people have come out to themselves and the world about them, their attachment to these communities and their way of seeing things has been, not surprisingly, emotionally difficult to sever. They often find themselves putting much of their emotional energy in relating to, arguing against, or obsessing over these traditions even if the traditions actually invalidate LGBTQ people.

Those outside a tradition can be baffled by why the stuck ones just can't get over it.

So, lets always ask who it is that has chosen which of the array of events of the past are to be considered traditions, that is, which events are more than just past happenings.

Someone had to decide which of history's events and ideas provide norms for the present and which don't, and their reasons and motivations might not always have been the best. All traditions have been defined by someone or some group picking and choosing from the past while ignoring most of it, usually a dominant group.

Otherwise, everything that's ever happened or been said would be included in every tradition.

And all traditions at one time were new. They began as something other than traditional.

So who says that you and I cannot define today for ourselves what is a part of our “tradition” and what is not? And what loss, abandonment, fear, guilt, and emptiness would we feel if what we chose was different from that of our parents, our religious communities, or other cultural institutions?

Though we may believe the voices that say we can't, shouldn't, or aren't able to do so, the fact is, we are fully capable of choosing for ourselves. It's a decision we can make. 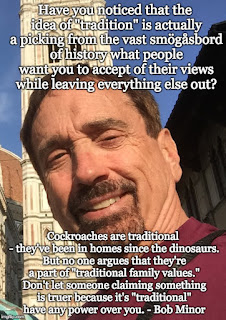 Not only is it our choice to make and define our own traditions. It's also our decision whether or not to be a part of the traditions defined by others.

We are not victims of anyone else's definitions or traditions. We do not need to live under the belief that we are only worthy human beings when we fit in with others or when others love us.

We can be as innovative as we want. We can choose what to value.

After all, some “traditions” are bunk. 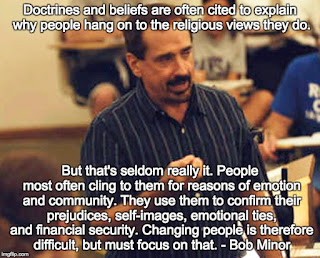 The right-wing obsession with LGBTQ people continues in 2020. Notice that it’s far from abating and becoming more desperate.

In fact, their present reactions remind one of the movies of the knight slaying the dragon – just when it looked as if the wounded beast was slain, the knight is tempted to turn his back. Then, as a last gasp, the final and most dangerous sweep of the dragon’s tail or bite of its fangs comes at the knight before its death.
For individual right-wingers there still seems to be an obsession with what LGBTQ people do in their bedrooms. It’s both a fascination and a kind of yuck factor – very love/hate – that they believe can only be relieved through a suppression that will lead, as suppression always does, to further obsession.
But on a larger level, the obsession takes the form of not being able to let go of the idea that LGBTQ people are able to live openly happy lives. They were almost okay with the existence of LGBTQ people as long as they were convinced that “t…
Read more