Come On: Stop Thinking of the Elephant 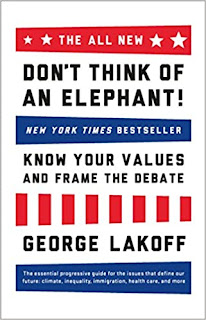 Ten years ago, my “Minor Details” column raved about the best book to come out of any political season before or since:

“Stop whatever you’re doing. Drop whatever you’re reading – even if it’s one of my books. The most important political book of the year is out and it’s a $10 paperback of only 124 pages. (So, you know Bill Clinton didn’t write it.)
“I thought Thomas Frank’s What’s the Matter with Kansas? How Conservatives Won the Heart of America (Metropolitan Books) was the most insightful book of 2004. It’s still number two, but the new book by well-known Berkeley Professor of Cognitive Science and Linguistics, George Lakoff, has trumped it.
Entitled Don’t Think of an Elephant: Know Your Values and Frame the Debate (Chelsea Green), this popularly written manual with a forward by Howard Dean, is, as the cover says, 'The Essential Guide for Progressives.'”

Ten years later, let me repeat: it was, and still is the essential guide for progressives, especially in its 2014 second, revised edition: The All New Don't Think of an Elephant: Know Your Values and Frame the Debate ($15.00). So, whether you have or haven't read it before, the latest Democratic disaster in this last election means it should be read now.
I wish that if the Democratic Party had really read it back then (supposedly Barak Obama did and actually followed it in his first presidential campaign), they would have practiced its principles. We wouldn't be buried under the avalanche of messes that brought us George Bush, the Tea Party and this year's elections results, while dreaming that future demographics are what will automatically make Democrats winners.
But Lakoff's is also the advice that every progressive activist needs to consider and study, whether they're attached to one of the two mainstream corporate parties or not. His insights apply across the whole gamut of progressive causes and to the whole movement. And not considering them is devastating.
Lakoff finds the key to understanding what’s going on in our culture today in terms of two different models of the family held by Americans and applied to the nation and the world.
Right-wingers speak from a “strict father model” of doing things where a strong, strict father is needed to protect the family in a dangerous world, to teach his children right from wrong through punishment, and to instill discipline in his charges who will be rewarded with prosperity. Lakoff shows how this “frame” is applicable to every issue – foreign policy, war, the economy, marriage equality, or equal rights. And therefore how liberals frame the debate is more important than the facts, the statistics, or the information we constantly cite. Conservatives have known this – he shows how they’ve worked at it for the last 40 years.
Liberals and progressives, Lakoff shows, frame the world instead in terms of a “nurturant parent” model which is not masculinity-centered and emphasizes opportunity, fairness, openness, two-way conversation, community building, and trust. These two models are in fundamental conflict. 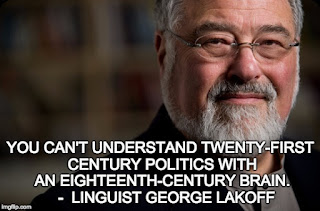 So, when liberals get caught up in individual issues without thinking, speaking, and acting in terms of the model they value, they lose the broader, long-range cultural momentum.
It's also the case that there is no “centrist” frame. And therefore it's important to understand how we can best convince people who would be in the moveable middle.
Most people are in fact in that middle and that means they actually hold both frames in their thinking. And the way to move them in our direction is to affirm the progressive frame over and over, and never affirm for them the right-wing frame.
Here's where those on the left make their mistake. Believing in compromise or bipartisanship or some other mediation, they actually affirm the right-wing frame by giving it credence and compromising with it.
Even stating it in order to deny it actually invokes and supports the right-wing position in these so-called centrists. Instead, for example, of calling it brainwashing (what it is) we call what anti-gay-profiteers do “ex-gay therapy” or “conversion therapy” as if it actually is therapy. And even saying “so-called” before the terms reenforces the right-wing frame of the matter.
When we engage in a debate about whether sexual orientation is a choice or not, we enforce the idea that the view that it is a choice is valuable.
When we talk about “traditional marriage,” we give value to the frame that there is such a thing as one traditional form of marriage even when we recognize that “tradition” is really just a made-up category where one chooses out of all of history what one likes and leaves out the rest, which is actually more of history. But arguing and repeating their label “traditional” even to deny it affirms the frame in the minds of the moveable middle instead of invoking our own frame.
The book is full of advice the Democratic Party should heed if it really does want to win over America. But its key idea is: “When you argue against someone on the other side using their language and their frames, you are activating their frames, strengthening their frames in those who hear you and undermining your own views. For progressives, this means avoiding the use of conservative language and the frames that the language activates. It means you should say what you believe using your language, not theirs.”
The chapter on “How to Take Back the Public Discourse” gives eleven things progressives can do. The final chapter on “How to Respond to Conservatives” lists 28 bullet-points.
I’d even settle for our political heroes just getting one point down: “Don’t move to the right…. It alienates the progressive base and it helps conservatives by activating their model in swing voters.”