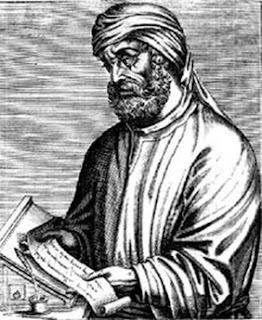 “The blood of martyrs is the seed of the church,” wrote second century Christian theologian Tertullian. And during his June 30th mass this year, Pope Francis agreed: “The Church grows thanks to the blood of the martyrs. This is the beauty of martyrdom.”

There's a sense, then, in which Christianities have historically wavered between a persecution complex and the desire to dominate over and control the world's morality. Christian denominations have had as their goal, after all, the conversion of everyone to their own position as if the old saying is: “The more the truer. “
And they're not alone. Modern defenders notwithstanding, Buddhist religions have flourished most when they were embraced by governments as have multiple Islams. Confucian ethics became culturally Chinese when the Han dynasty enforced it as a political philosophy, and Shinto has always been tied to the status of the Japanese emperor.
Even Hindu sects became strongest when the kings of India endowed their temples and deities. While in the modern period most traditions have justified nationalisms that combine religious identities and politics.
The sense of being persecuted has been a rallying cry provoking the faithful to protect their brand and even take up arms. Pacifists in these traditions may claim that they have the truer view of each faith, but history shows that often a sense of one's religion being persecuted has led to violent defensive measures by the fearful.
That defense spawns efforts to get governments on the side of the faith for both self-protection and to enforce a sense that right is confirmed by might. We have certainly seen this in the rise of the Christian right-wing in late twentieth-century US politics.
The need to believe that the US is a Christian nation and also to make it so in the last fifty years has been a major thrust of right-wing religion. Yet the ever-increasing evidence that in spite of their financial and emotional investments culture is moving further and further away from their sectarian vision of a Christian society, especially among younger generations, makes people who say “God is in charge” but down deep fear that's not true, slide back into that persecution complex.

The pushers/dealers of addictive religion know that the fear of literal or figurative martyrdom can energize their devotees to action. Hence, the message of the day is: “We are the truly persecuted; we must therefore take the position of martyrs and fight our way out."
No more is this true than in the response to the issue of marriage equality. State by state, the barriers to it have fallen and the end of every state ban looks inevitable.
They now accuse both conservative and liberal judges of being activists who are discriminating against the sectarian right-wing. ”Activist judges” as a label, after all, refers to those who decide against the right-wing.
Politicians must, therefore, figure out how to play to this right-wing religious base in the midst of the inevitable movement of history. They must show that they are willing to stand by the gate as the liberal hordes burst through to prove to the right-wing that as politicians they are moral, Christian people – though they know that this tactic will only be useful symbolically for a few more election cycles.
The strategy of right-wing tacticians has changed in turn. It's now to use the courts and state legislatures to defend themselves from what they call anti-religious discrimination.
We've already seen this in state legal attempts to “protect" businesses from having to serve LGBT people based on sectarian religious beliefs. Think of martyr Melissa Klein, the Oregon baker who shut down her bakery rather than serve gay and lesbian couples and incur a fine for discrimination, framing her martyrdom as the government destroying her career and forcing her to close her business because she stood up for her faith.

The famous Hobby Lobby case has set a precedent for more of the same in spite of any Supreme Court attempts to portray it otherwise. State legislatures will be seeking more exemptions to allow some groups, companies, and people with religious objections to refuse benefits or service for gay spouses, hoping to find themselves before judges with ideologies like those behind the Hobby Lobby decision.
The pattern to be followed, Michelangelo Signorile reported from this fall's Values Voter Summit, will be similar to right-wing attacks on Roe v. Wade. They'll have to seek "incremental" wins, Frank Schubert, the mastermind behind the Proposition 8 campaign in California and other marriage ban campaigns across the country, told Signorile, just as they're doing to chip away slowly at abortion rights, which of course has been very successful. They'll have to the find the gay "version" of "partial birth abortion," Schubert said.
All of this, then, has the potential of fueling lucrative new fundraising for religious right-wing leaders. No longer will they be able to raise money with the threat of the legality of everyone getting married to whomever they love. 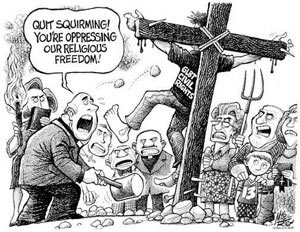 And the avalanche of victories for marriage equality will be proof to those desperate for such religious and political leadership that they are losing in the battle of the last decades to try to take over the nation. The fight will be more desperate, for the message is that the left is coming to take their very souls.


The fight will now continue on this front and will include lies told by the right-wing in the name of righteousness. Expect many fabricated stories of discrimination like those we've seen before. Expect those who get needed attention as martyrs to exaggerate, embellish, and create a constant supply of horrors.
This is when we'll have to be clear about how what they'll be doing is a re-definition of the separation of church and state, a re-definition of persecution, and a re-definition of freedom. We'll have to call “sectarian” what they're doing, not “Christian.” And we'll have to be prepared in turn for some very nasty attacks in the name of religion. 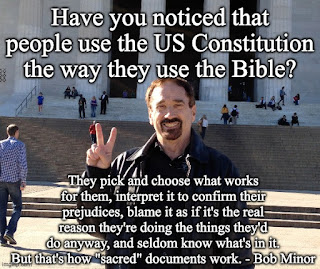 One document is over 2,000 years old and the other over 200. That means it’s even more difficult for historians to determine the original intent of the Biblical authors than it is for that of the writers of the newer US Constitution. One was compiled over thousands of years in various cultures by numerous writers while the other was written by a much smaller group of men over less than a year. So though there were disagreements among the Constitution’s authors, unlike the Biblical authors there were opportunities in the Constitutional convention to sit down together and work out compromises for the differing positions of its composers. One is full of references to a god among gods, while the other has none at all - and merely two references to “religion” (counting the first amendment to it). That means they have differing intentions. One’s authority is claimed and enforced by religious institutions and their hoary traditions while the other is enforced by legal and polit
Read more